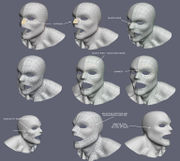 Okay, now for the nose. I do not model the nose until about now. The reason is because the nose is a b*tch to model. It generally has many topology consideration that needs to work for facial animation and just so it looks good. It also demands a lot of reworking of the surrounding topology, but if you have a nice topology flow already established it will help more than hurt.

One of the thing that makes the nose so tricky to model is that it requires more densely packed definition in a small area and that can cause problems, especially if it produces 5-points that won't play nice with deformation.

Now a little rundown of what I did in this series. As you can see I extrude the area of the nose and I tweak the shape into place. I add an extra edge loop from the nose to the mouth. This is good, because I know I could use some more edges from the brow and the mouth, and this didn't happen due to luck, but to a solid foundation I already had in place. The extra edge loop cause a bit of warping, but I selected a generous amount of vertices surrounding the newly created vertices and SMOOTH them a few times to smooth out the rough shape.

Not much to say here, I am just forming the shape and tweaking as I go along. 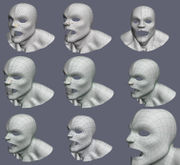 Here I am reworking some of the surrounding topology to work with the nose. I am also giving the nose more definition, since I wanted the nose to look meaner, sort of like a broken and bulging beaten-up boxer's nose.

I got the look I want for the nose, but I don't like the way the nostrils came out and as you can see in the last set of images, there is an undesirable crease showing due to a 5-point. I have a bit of a snarl to the facial expression, so it is easier to see what might happen during such a expression if it was being deformed that way. It is always a good idea to check out issues that might occur during deformation, with some quick deformation test. I sometimes like to start out with an expression like anger, than a neutral pose. An anger expression really works the face, using a lot of muscle edge flows to create a good expression. It is a good way to establish a solid topology for facial expression. You neutral expression, like your other expression will be morphs of this expression.

I am just re-working some edge flows and getting my topology the way I want it flowing. I have a U shape edge flow going, from the brow down the underside of the nose, and I have edge flowing in the direction of muscle reaction during a snarling or growling expression. I also redid the nostril to a more extreme, anger expression, which fits what I had in mind.

There are still some 5-point areas on the nose mesh, but due to their placement, it is hard to notice any unsightly distortion during this extreme facial expression.

Another view, but as a whole head: 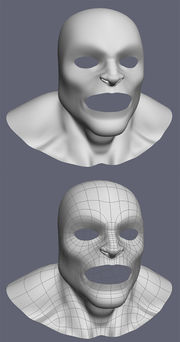