Finishing up the body portion of the character. Lower abs, some fatty obliques, and lower back. 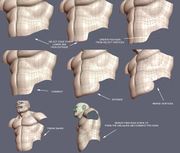 Building arm. I notice that I have 5-points directly in the fault lines where my area will deform, not wanting to risk deformation problem later on, I rework the edge flow. 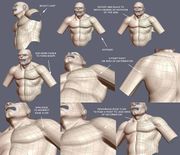 In here I need to add more edges, extra definition for proper smoother deformation. The shoulder-upper arm area is always tricky area of deformation, and requires a good amount of definition(edge loops) to get good deformation.

I am forming the shape of the upper arm. Generally, there are 2 muscle shapes you have to be aware of. One the biggest muscle in your upper arm, the bicep which forms more towards in the direction of the body, than being in the center of the upper arm, this is something many people tend not to do properly, and the tricep which runs counter to the bicep, so it forms more away from the body than towards.

Another area of deformation is in between your upper arm and the forearm, the elbow region. In this area, it is a standard practice to have more than enough edge loops, to get good deformation out of the area. The arm needs to flex from 0 degree up to maybe 135 degree, so the deformation is pretty extreme. As a rule of thumb you shouldn't have anything less than 5 edge loops in that surrounding elbow region if you want to deform that region properly.

Another mirror check. Needs some minor fixing and tweaking, but so far so good.

Right about this time I almost always do a quick deformation check. It is a good idea to do so, to spot areas that are having deformation problems and needs further work. I catch some minor issues, but I am pretty happy how things are deforming, the shoulder bend at the right spots, shape is maintained. The pecks stretches with the shoulder and bicep, as the edges fans out, which was what I wanted.